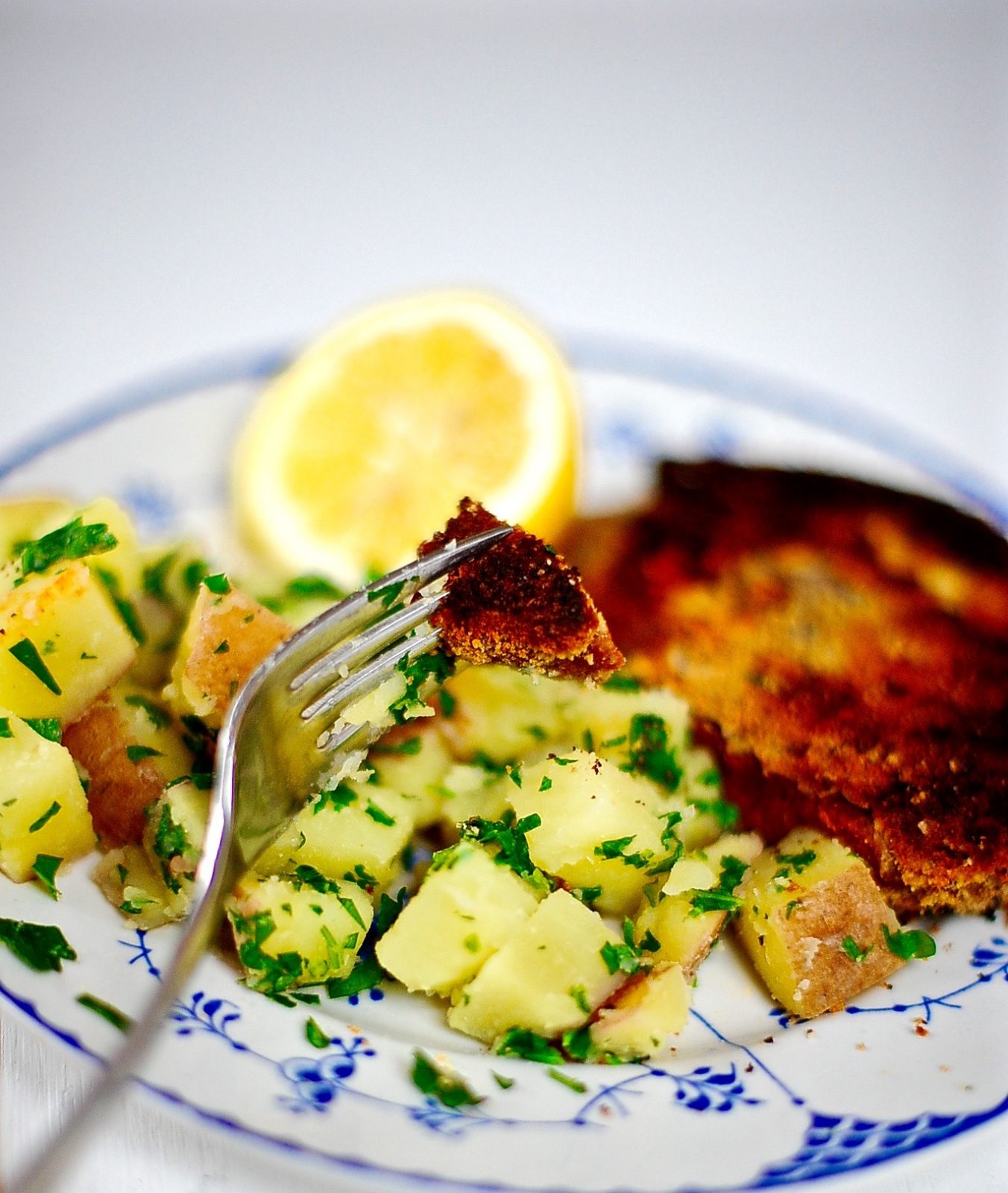 Jump to Recipe Print Recipe
These vegan seitan Schnitzel are crisp on the outside and succulent on the inside. This is for those people who have been longing for their grandmother’s schnitzel. You know who you are.
Early one shabbat morning we left the kids with my mother-in-law and her husband Big White Noam (so named by our son to differentiate him from another Noam). My daughter was the namer of inanimate objects like computers (Lisa) and our son renamed relatives, like my uncle formerly known as Niels, who is now called Big Orange.

“Ask not what you can do for your country. Ask what’s for lunch.”

We set off to a nearby town to breakfast with Hanaan’s yemenite buddy Itamar and his beautiful bride (so named because I have forgotten her name). They sat us down in their sun streaked living room and set before us myriad little dishes: savory salads, salty pickles, unctuous bean purees, crispy phyllo packets with melting salty cheese, tomatoes that had yielded their form and surrendered to sweetness in a puddle of golden green oil.

“If more of us valued food and cheer and song above hoarded gold, it would be a merrier world.”

Our hosts encouraged us by placing a spoonful of this and a scoopful of that on our plates. An hour later, when we were well and truly full, our hosts, to our horror, announced breakfast was ready and led us to their little kitchen table. Hanaan and I avoided eye contact at this point. There was nothing to do but man up and eat the breakfast set before us. Eat we did, a grande yemenite breakfast, with the heavy butter laden slow baked Jachnun bread as the center piece. As the meal drew to a close and our belts were stretched to the breaking point out host announced that as the guest of honor I needed to close the meal by eating the last of the boiled eggs. Never a shirker I did my duty.
*
On the drive home we congratulated ourselves on having done justice to the hospitality of our friends and were relieved to know that not another bite of food need pass our lips that day.

“Seize the moment. Remember all those women on the ‘Titanic’ who waved off the dessert cart.”

The first thing we saw when we entered my mother-in-law’s house was the dining room table set for lunch and covered, and I mean covered, in a plethora of dishes both hot and cold, the crowning glory being Big White Noam’s sabbath specialty fried schnitzel.
Yes we could have demurred but one look at Big White Noam’s face and we knew that saying no would break a tiny chip out of his heart. He was a big man, with a big heart, and what is one tiny chip you ask? It is nothing unless you are the one doing the breaking.

It seems to me that our three basic needs, for food and security and love, are so mixed and mingled and entwined that we cannot straightly think of one without the others. So it happens that when I write of hunger, I am really writing about love and the hunger for it, and warmth and the love of it and the hunger for it… and then the warmth and richness and fine reality of hunger satisfied… and it is all one.”

Check out my new Aquafaba page!  For tips, tricks and to see all of my Aquafabulous recipes.
5 from 5 votes

Crisp on the outside, succulent on the inside. This is for those people who have been longing for their grandmother's schnitzel. You know who you are.