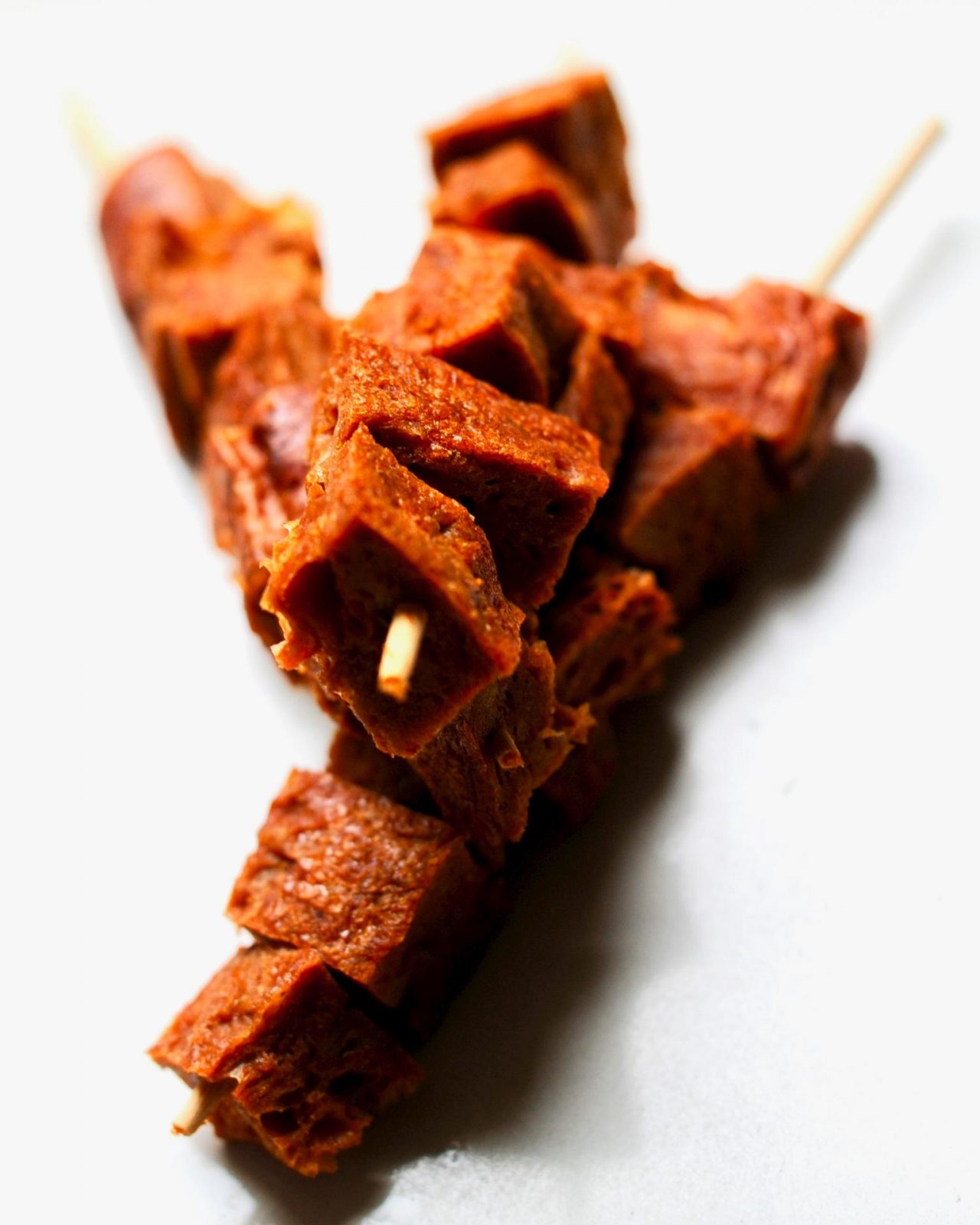 Flavorsome cubes of seitan, marinated in a rosemary-garlic sauce and charred in the broiler or over a grill. Dip these herbaceous kebabs into my cooling cucumber tzadziki for a short trip to the greek isles. Serve as an appetizer or as part of a main course.

There were years that I couldn’t listen to Leonard Cohen’s songs without crying. Years. His voice brought me back to the shatteringly bright days, the carefree days, the lemon scented days, the lazy golden days of childhood and my mother’s youth on Hydra where all was possible for her and us.

I still ache when his voice comes on the radio. And now this anthology has come out with all the voices singing in harmony and dissonance a song of the early years on Hydra.

Perhaps you know of Hydra through Leonard Cohen’s songs, or as the place where the artist Ghika lived, or through Charmain Clift or Henry MIller’s writing. For me, for so many of us, the rocky, pine scented, car-less island is an old friend. My mother referred to Hydra as a lover, at times a cheating lover, a lover who snared your heart with sharp hooks. There is no shaking Hydra off.

When We Were Almost Young: Remembering Hydra through War and Bohemians

“Marianne and Leonard’s relationship would last the better part of a decade, much of it spent on Hydra, where Marianne would inspire Leonard to write the songs “Bird on a Wire” and “So Long, Marianne,” … When she lay dying in the summer of 2016, Leonard wrote to her: “Know that I am so close behind you that if you stretch out your hand, I think you can reach mine […] Endless love, see you down the road.” She died two days later. He followed a little over three months later.”

-Helle Goldman, When We Were Almost young

“The very real magic of Hydra floated about us – the insistent buzzing of cicadas, drifts of pale almond petals, the anise of ouzo licked off our fingertips after a quick dip in our parents’ glasses, the sting as you brushed against nettle plants, the not so gentle pinch on the cheek by black-clad widows. Lemon blossom winds invaded our dreams and we woke to goat bell mornings.”

-Johanne Rosenthal, When We Were Almost Young

“the melancholy I felt at being unable to join in their escapades, the smell of fishing nets drying in the sun and of basil plants in the surrounding courtyards…Goats’ bells and the clatter of hooves as mules approached, making us step aside. The taste of the aubergines in tomato sauce, fried potatoes and meatballs that Mother used to make for us to eat after bathing.”

-Panagiotis Rappas, When We Were Almost Young

“Out in the water, Father paused from his hunt to see how I was doing back on land. Seconds later he was on the beach, ripping the octopus off me. Its suckers left round marks all over my arm. In spite of experiences like this, when asked at around this age what I wanted to be when I grew up, I answered that I was going to be a diver by day and a writer by night, like Father.”

-Helle Goldman, When We Were Almost young

If you are a sucker for food on a stick then take a look at my Seitan Satay.

Or if it is greek food you love then you’ll love my almond based, herb marinate Vegan Feta recipe.

Check out my Aquafaba page!  For tips, tricks and to see all of my Aquafabulous recipes.

A perfect appetizer that can be dressed up or down. Feel free to grill these in summer or broil then in the oven in winter. Served with a refreshing garlic cucumber yogurt sauce.

You will need 6-8 bamboo skewers or thin chop sticks for this recipe. Soak them in water for 30 minutes before you make and grill your kebabs.