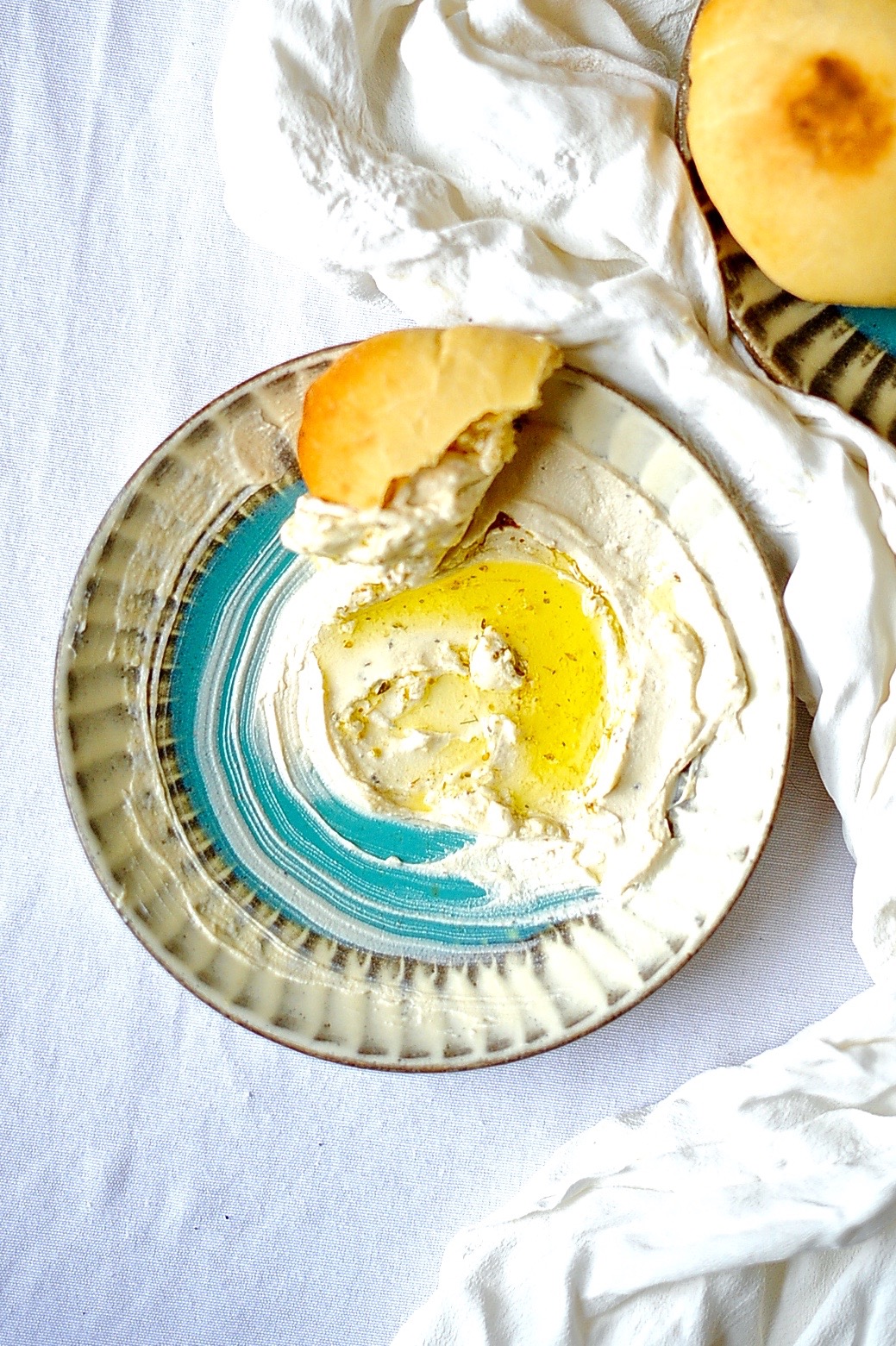 This Vegan Labneh recipe tastes, hand to god (as my Grandma Eva would say) just like its dairy counterpart. I threw in a fresh pita recipe as good pita is so difficult to find outside of the Middle East.

What is Labheh and how can you make it vegan?

I am directly quoting my daughter’s friend here. Lol!

Labneh is a tangy, silky Levantine cheese spread that can be served as a dip with pita bread or smeared on a toasted bagel. The cheese can also be rolled into balls, encrusted in herbs, and preserved in golden olive oil.   Vegan Labneh is made the same way as its dairy counterpart. You simply curdle the milk (cashew milk) with an acid (lemon juice0 and that separates the curds from whey. Then you wrap it in cheese cloth and allow it to drip out most of its moisture.

In winter there was rain that fell for days without end and pulled from the almond trees green fruit so tender that you wanted to cup them with your hands and protect them like the fuzzy heads of newborns.

This seasonal memory is one of the corners where my husband’s and my childhood intersect, he on a kibbutz in Israel and me on an island in Greece.

My mother would mix lemon juice and salt into our leftover yoghurt, wrap it in white linen and hang it from a hook until it had drip, drip, dripped out all of it’s whey and become an impossibly tangy, thick spread. As we had no refrigeration this alchemy was both practical and delicious.

Vegan Labneh rolled into balls and coated in herbs.
In Israel a sloe eyed yemenite friend showed me how to salt sheep’s milk yogurt, roll it into small, herb encrusted balls and preserve them in jars of golden green olive oil. This she taught me was called Labneh. We cooked as we danced to the radio in her tiny kitchen, twirling and laughing.
Both Hanaan and I grew up with the tang of fresh white cheese spread on our bread.
One spring as I was running through the newly greened hills of Jerusalem I heard the bleating of goats in the still air. Following the sound, I left the dusty, sun beaten path and entered the cool of the forest. There beneath the pines, a beduin tent had sprung up between the pink cyclamen blooms.
A young woman called to me. I stopped my running and salty with sweat approached her. She stood in robes that flowed like dark water, beckoning me to follow her into her tent. She and her mother plied me with green mallow soup, flat, fire-scorched bread and thick creamy goat cheese. They fed me with their own hands like a baby bird, laughing at my clumsy attempts at eating one handed with no utensils but a piece of torn bread.

An Arab shepherd is searching for his goat on Mount Zion
And on the opposite hill I am searching for my little boy.
An Arab shepherd and a Jewish father
Both in their temporary failure.
Our two voices met above
The Sultan’s Pool in the valley between us.
Neither of us wants the boy or the goat
To get caught in the wheels
Of the “Had Gadya” machine.
Afterward we found them among the bushes,
And our voices came back inside us
Laughing and crying.
Searching for a goat or for a child has always been
The beginning of a new religion in these mountains.
-Yehuda Amichai
Herb Marinated Feta Cheese

Labneh is a tangy, silky cheese spread that can be served as a dip with pita bread or smeared on a toasted bagel. If you have the time make your own pita bread, do so, it is well worth it. The Labneh takes about 24 hours inactive time for soaking and draining but only a total of about 30 minutes active overall. If you have a Vitamix or other high speed blender you can cut the process down by 6-7 hours.

These pita have a wonderfuly fluffy texture and are so easy to make that even a novice baker will end up with a delicious product. If you've never tasted fresh baked pita you will be in for a shock, the good kind.

I was inspired by the  http://plantepusherne.dk  recipe for almond milk cream-cheese. This recipe has stood me in good stead and gave me the confidence to experiment with cheese making again as a vegan. Nina’s recipe for butter is beyond compare as well!

Also the best Vegan cheese I have ever tasted is made and sold by a one woman company in Israel and called Einut’s. She has no strange ingredients in her products and the textures and flavors are sublime.