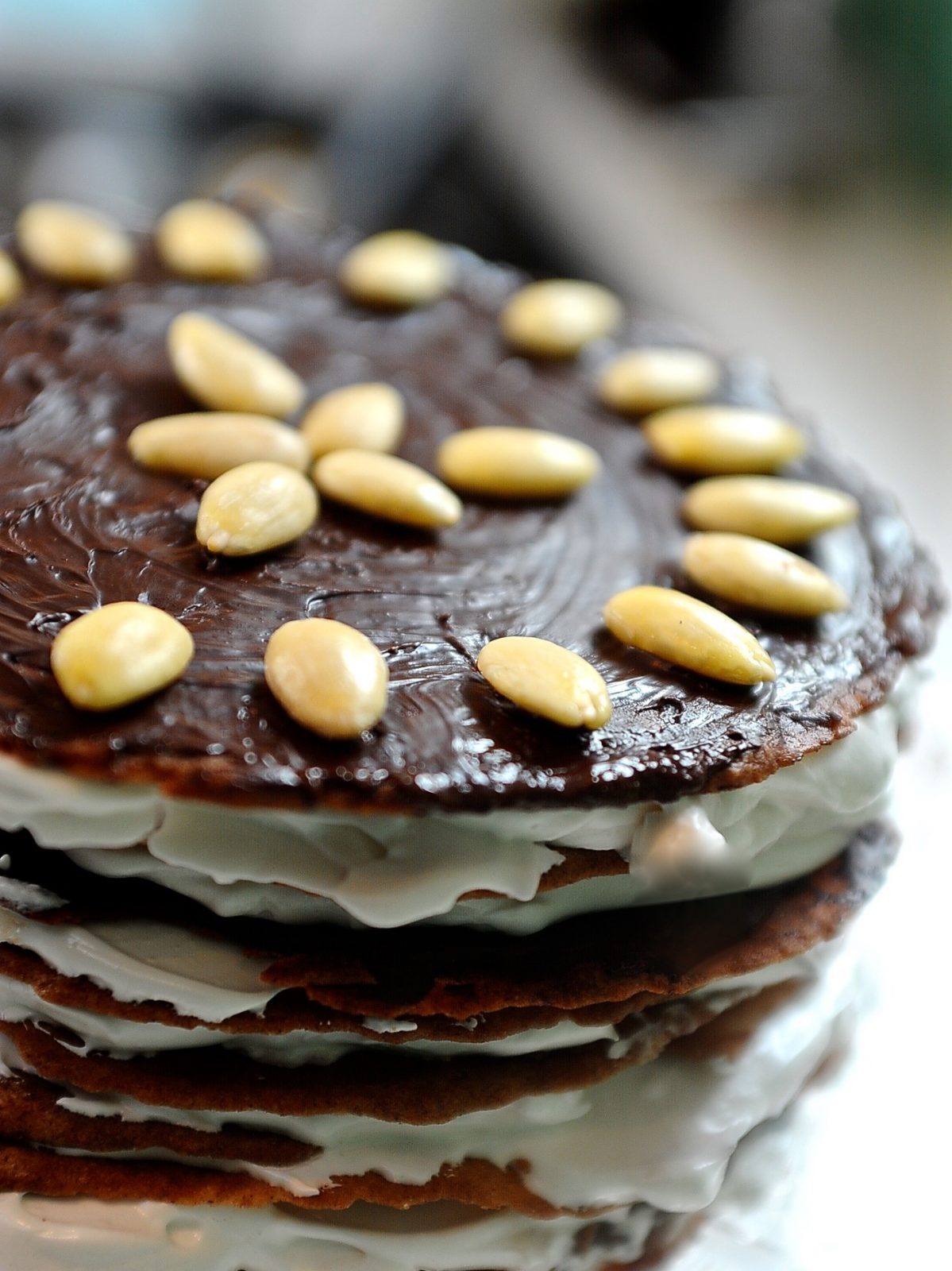 Listen while I cut this cake! Snap snap snap…Each impossibly thin cinnamon layer crackles beneath the knife cushioned by layer after layer of whipped vanilla clouds. The luscious flavors of dark chocolate, billowy marshmallow cream, and spicy cinnamon crisps in each mouthful make for a hushed dessert, a dessert to savor.

I am particularly proud to bring you this dessert, a specialty of my Aunt Helle. She would keep the baked cinnamon rounds in a large tin, each cookie separated by circles of parchment paper. When company dropped by all she needed to do was whip up some cream and construct the layers of whip and cookies. The top layer was a disk ornamented with dark chocolate and almonds.

My sister and I would stand silent as kitchen mice watching as our aunt, like Rumpelstiltskin spinning straw to gold, whipped plain cream into billows of fluffy whip. We gratefully nibbled broken cookie shards, as our Aunt smoothed layer after layer of cookie with whipped cream, constructing a tower in brown and white.

One time we terrible little american girls decided to improve upon the cake by adding sugar to the unsweetened whipped cream when our aunt’s back was turned. We added a scoop of white crystals to the whipped cream and folded it it. Dipping a finger in and tasting the improved whipped cream we realized we had mistaken salt for sugar.

The cookies keep indefinitely in a cookie tin. In fact their flavor improves after a couple of days. This recipe makes enough for (2) 7 inch cakes, allowing for breakage. If you’re in a particularly humid area then make sure to place a desiccant packet into your tin to keep out the moisture.

Remember this is a Cinderella of a cake. It will turn into a pumpkin in a short time span. Eat is while is it is still a glorious carriage and be reminded of the ephemeral nature of the world.

“I carried recipes in my head like maps.” -Joanne Harris

Store a bunch of these spicy cinnamon wafers and you will be able to whip up (literally) an elegant show stopper of a dessert at the drop of a hat. This recipe makes enough dough for at least 2 cakes plus breakage (for the kitchen mice)

This streamlined recipe for making aquafaba whip is really the best out there. Check out Lynne's tips and tricks on Aquafaba (vegan meringue hits and misses) Facebook group