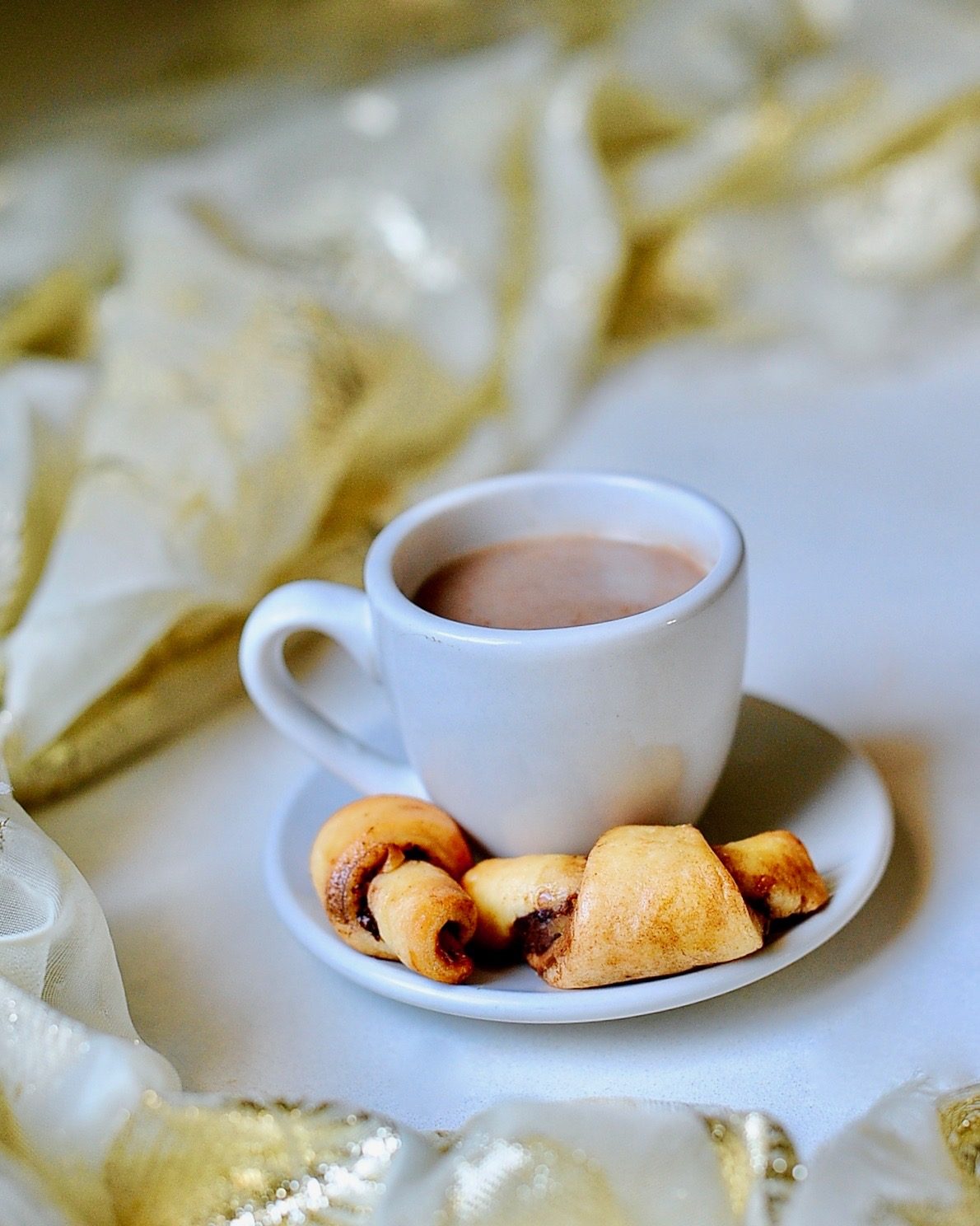 Rugelach reminds me of a little cafe in Jerusalem where my boyfriend (now husband) and I would go when he was on leave, and order a plate of these flaky golden crescents with hot chocolate for dipping.

I have been using a version of Joan Nathan’s Rugelach recipe since before I became vegan. I veganized it with a few minor changes; adding lemon zest to the dough and cutting the butter instead of creaming it with the sugar.

If I had to name an all-time favorite cook book author Joan Nathan would win hands down. Each of her books is a wonderful read on the cooking and culture of jews of the diaspora. Here is one of my favorite of her books; King Solomon’s Table: A Culinary Exploration of Jewish Cooking from around the World.

“Take eight cents from the cracked cup and get a quarter loaf of Jew rye bread and see that it’s fresh. Then take a nickel, go to Sauerwein’s and ask for the end-of-the-tongue for a nickel.”

–A Tree Grows in Brooklyn

My Grandma Eva was a bitch. Ahh that felt so good to write. She was much more than that all defining word but basically grandma told it how she saw it. Here is a classic grandma moment:

My sister, dad and I were sitting with Grandma at the formica table in her all pink kitchen. Grandma had set out food for sandwiches; Classic aromatic rye bread, a squat jar of thick pungent brown mustard, half a wedge of iceberg lettuce, a thick sliced tomato straight from the Frigidaire, slivered white onion, and piles of sandwich meats. Oh yes, I forgot the best part; a mountain of huge sour pickles from the wooden barrel at the deli.

“…down Graham Avenue, the Ghetto street. She was excited by the filled pushcarts-each a little store in itself-the bargaining, emotional Jews and the peculiar smells of the neighborhood; baked stuffed fish, sour rye bread fresh from the oven, and something that smelled like honey boiling.”

–A Tree Grows in Brooklyn

Grandma sat across from me at her small round table. She was staring at me as I smeared the mustard on my bread, her eyes narrow.

“Hanne, your sister Helle (my blond shiksa-dream of a sister) is beautiful. She could be a model, look at those legs. Oy”

I carried on making my sandwich carefully layering onions over the mustard.

“Helle, is a Student, Helle gets straight As. Helle is the smart one.”

I nodded and began munching my sandwich, apparently grandma was on a roll.

Now she turned her brown eyes on me and stared; scrutinizing me inside and out.

Two minutes later she sighed, “Hanne, you…you…you have a nice profile.” she said, as she stood to refill the pickle plate.

“And you have bad skin. Oh, look everyone, we’re all making observations!”

My grandma made the best Babka! Here is her cinnamon chocolate recipe veganized.

If cookies are your thing then you must try my Mint Milanos. You will have a Pepperidge Farm experience.

Tis recipe was inspired by Joan Nathan's recipe for rugelach, veganized and tweaked to my palate.  Makes 50 small rugelach.