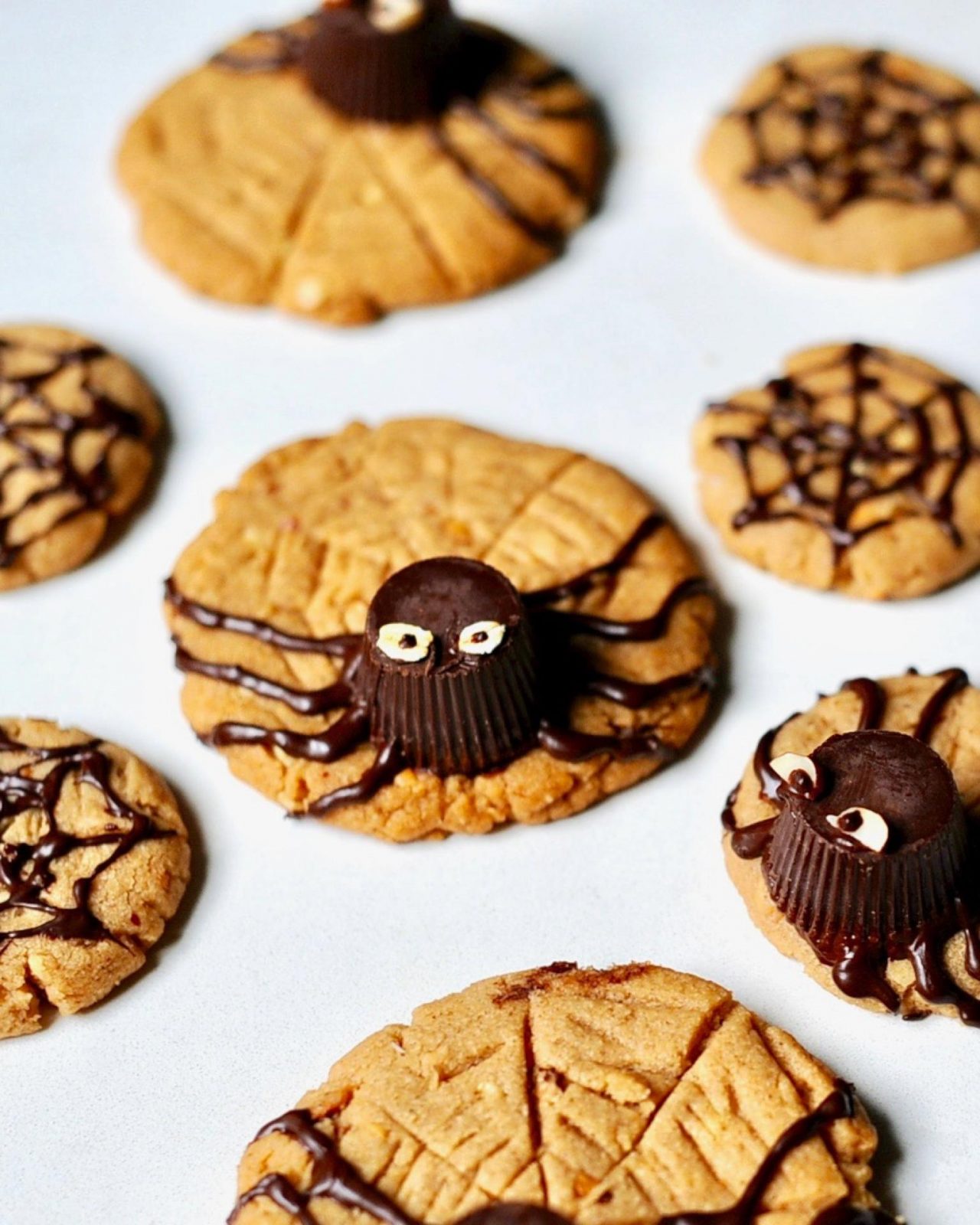 Make these peanut butter spider cookies but make sure you eat them before they eat you! My peanut butter cookierecipe is so simple with only four ingredients and packs the most peanut flavor I’ve ever tasted in a cookie. I recommend crunchy peanut butter to get the full effect. These cookies are not only adorable but taste like eating freshly roasted peanuts dipped in chocolate.

The other day my hubby, finder of all products sweet and vegan, was munching down on a bag of these mini vegan peanut butter cups. Aha! A light bulb moment and I thought: I can use them to make my own adorable Halloween spider cookies like the ones I saw on Pinterest last year.

I tried wrestling the bag away from him on the spot but he held me away with one arm while shoving the rest of the still wrapped candies in his mouth.

Okay it didn’t happen quite that way but had I tried to grab the bag he would have started crying so I bought my own bag and made these cookies. I recommend naming each spider cookie before you eat them.

The night before last I dreamt that I was caught in a huge spider’s web, heart pounding I struggled, and awoke bathed in cold sweat. In the morning a friend related on Facebook that the hefty hairy spiders that had been “nesting”, I mean “webbing” in her windows had been chased away by frost.

Many of us have complicated relationships with arachnids. My Aunt Helle had a wild uncontrolled terror when she saw a spider and yet her innate humanity asserted itself over arachnophobia meaning that she had to capture and release those spiders that sent her into paroxysms of fear and screaming.

My kids do a spot on impression of me reading aloud Charlottes Web:

“And then…and then…(sniff) …Charlotte…(sob) died. The Fair Grounds were soon deserted…Nobody, of the hundreds of people that had visited the Fair, knew that a grey spider had played the most important part of all. No one was with her when she (clears throat) died.”

At this point I burst into sobs and my children burst into peals of laughter. Within seconds I was laughing along side them. They loved those moments when I would break/shatter while reading aloud to them and so my sobbing saved them from feeling too sad and their laughter saved me from sadness.

“Wilbur never forgot Charlotte. Although he loved her children and grandchildren dearly, none of the new spiders ever quite took her place in his heart. She was in a class by herself. It is not often that someone comes along who is a true friend and a good writer. Charlotte was both.”

If you are on the all peanut butter diet (winky face) then don’t forget to include my Seitan Satay with  spicy peanut sauce.

A moist, crumbly halloween cookie that is more treat then trick. You'll note that my peanut butter cookie is incredibly simple, I was inspired by a letter to the editor of Gourmet magazine in the 1990s that had a recipe for 3 ingredient peanut butter cookies. I made them. They were so peanut buttery. I replaced the egg with flax egg when I became vegan but the texture and flavor were off, now I have changed out the flax with aquafaba and voila the texture and flavor are spot on again.