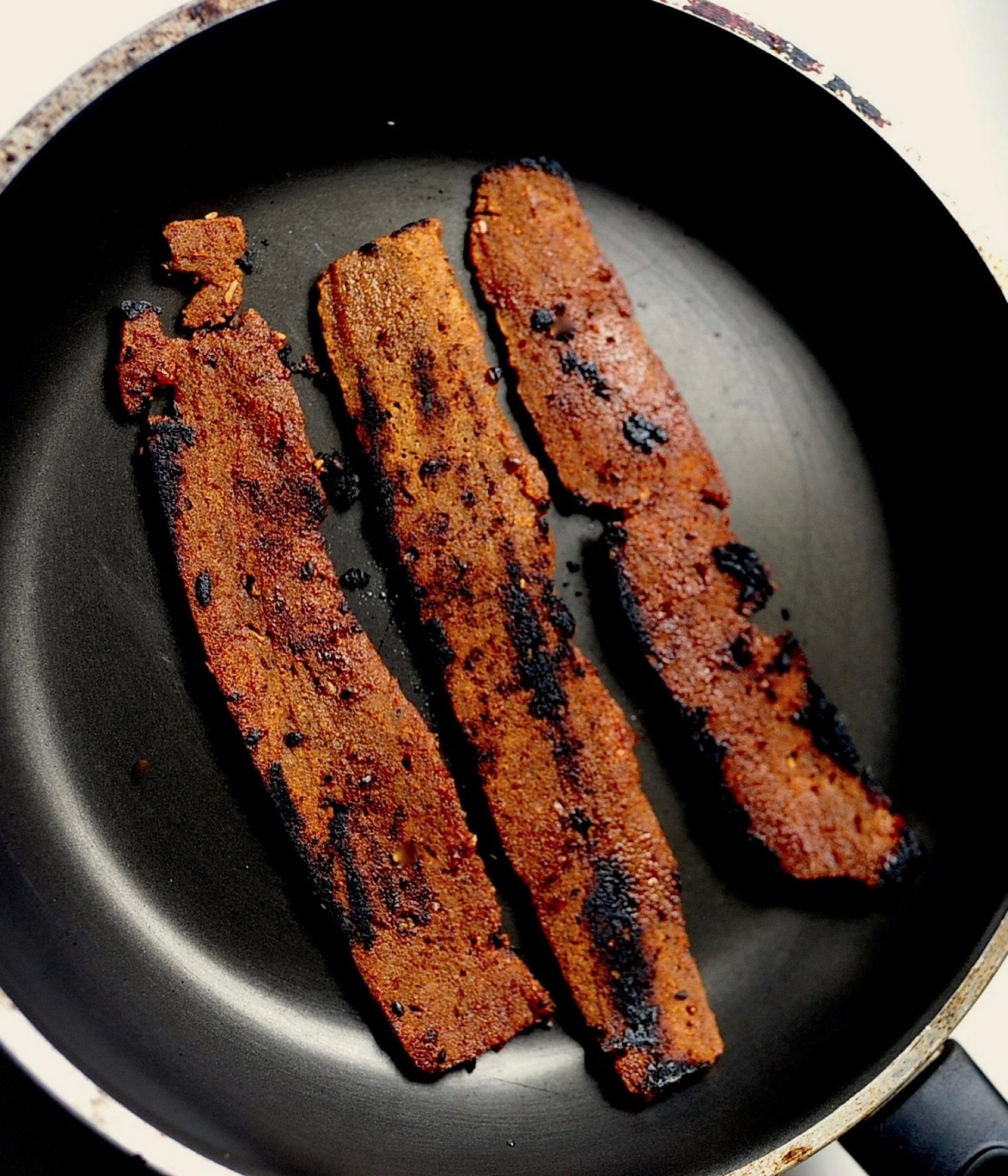 Warning: This vegan bacon is addictive.

I have tested this smoky maple seitan bacon on omnivores and it rated two thumbs up.

Here is how it goes down when you serve this to self professed “real” bacon lover. They will discreetly wrinkle their nose and insist on taking half a strip instead of a whole. Then they’ll place a tiny corner in their mouths and nibble just the teensiest bit in case it is not maple but hemlock infused.

“Not bad” they’ll announce with surprise. They’ll throw a couple of strips on their sandwich along with juicy tomato slices and crisp green lettuce leaves.  By the end of the meal they will have finished every crumb of their 1st vegan BLT.

“Hey, do you have anymore bacon?” they will ask plaintively pointing to the empty platter with their left hand while clutching two strips of bacon in their right.

Oh gosh now my mind is wondering what aria this vegan bacon is singing.

The sweet, smokey amber marinade is sexy like Musetta all tarted up for a stroll down the boulevard in La bohème.  I see a strip of vegan bacon swaying down the street, head tilted singing unselfconsciously :

When walking alone on the streets,
People stop and stare
And examine my beauty
From head to toe
And then I savor the cravings
which from their eyes transpires

Or perhaps this bacon is a hunky “savory” baritone like Escamillo in Carmen.

Your toast, I can give it to you
Sirs, sirs, for along with the soldiers
Yes, the Toreros, can understand;
For pleasures, for pleasures
They have combats!
The arena is full,
it is the feast day!

Seitan is unbelievably versatile, I use it in my Seitan Satay with Spicy peanut sauce,

Onward to the recipe.

A make ahead vegan bacon that can be pulled out of the fridge and fried up in 4 minutes flat. Don't be alarmed when you see the long list of ingredients. Note that most of them repeat themselves in both the dough and the marinade there fore the list is much smaller.

The dough will take you 10 minutes to make and then just pop it in the oven for 1/2 hour while you nap. After that all you need to do is make the marinade (3 minutes) and slice up the bacon. Now you are good to go and have a week's supply of "bacon".