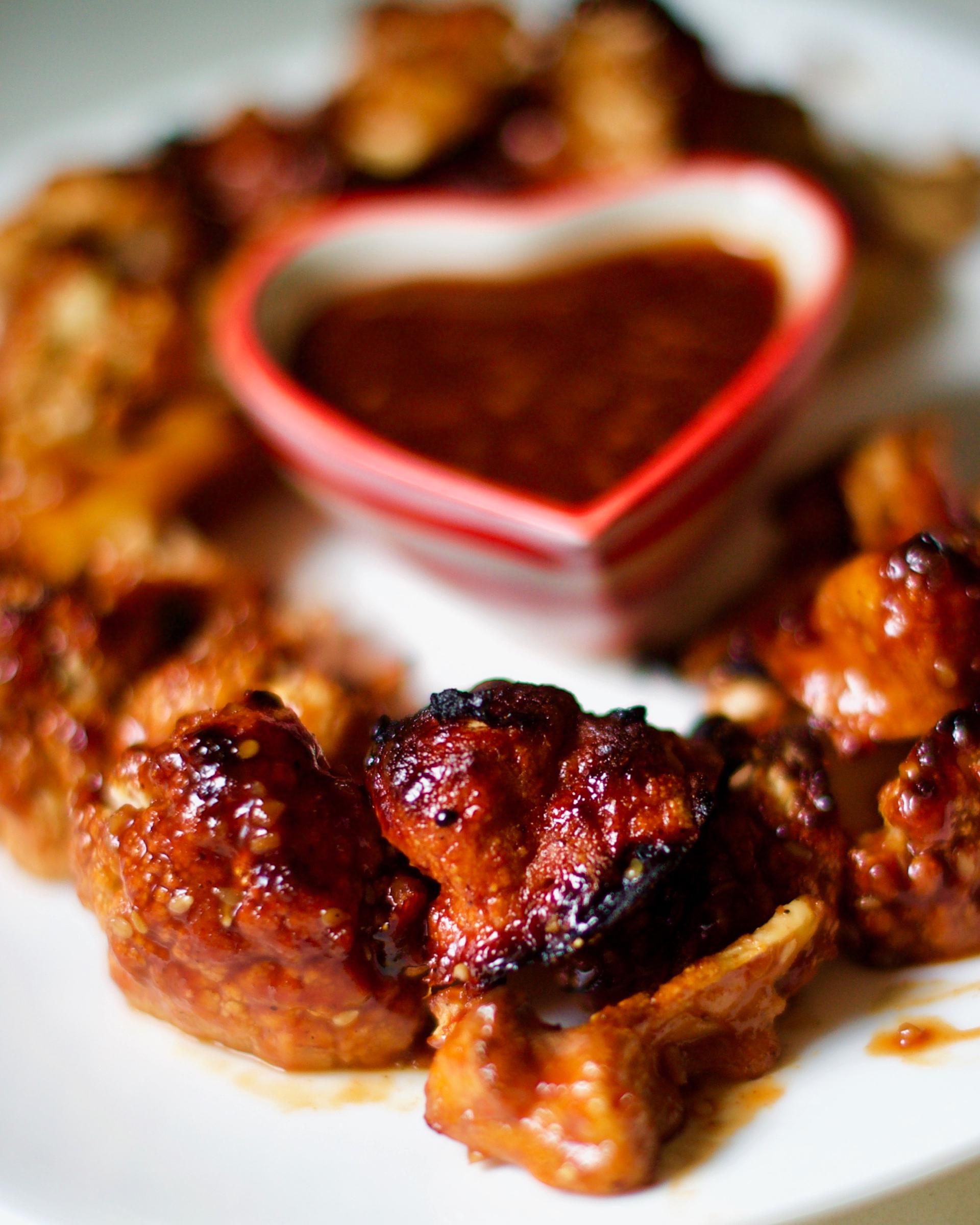 Crispy Asian Cauliflower Wings (Vegan, GF): Go ahead. Grab a wing! A vegan cauliflower ‘wing” that is. Bring it up to your mouth and smell the smoky sweetness. Crunch! Your teeth break through thin crackling crust and enter the yielding nutty cauliflower beneath. Each bite of these plant based wings is more delicious then the last. I would suggest serving these to guests as the ultimate appetizer but take another look at these salty, sweet, sticky, crispy beauties…do you really want to share them?

If you told me last year that I would be longing to have a mask in every color to match my outfits I would have called you crazy.

Then again if you had told me when I was a child decimating a pile of chicken wings that one day I would be vegan and eating cauliflower wings instead. I would have asked “What does vegan mean?” And then called you crazy!

I have a hen. Her name is Ida. She lays one egg each day. I whip it with sugar and Eat it.- This little ditty was recited by my mom and her sister in the days they were learning English in the 1950s.

My mom was raised on a chicken farm in rural Denmark just after the war. Each child had a pet hen that they lavished attention on and yet they ate chicken most nights.

Later in life she became vegan. Never one to sit on her laurels she joined with local animal rights groups and picketed restaurants.

Picture this: You have just pulled up to your local PETA rally. You are excited but also tense about standing up in public with a sign and making yourself a target for any stranger on the street. You check your hair in the rear view mirror, smooth down your expensive hipster clothes, turn off your Prius, and step from your air-conditioned vehicle into the sweltering summer heat, gripping your stack of printed posters sent from PETA.

You greet the other protesters who are standing stiffly in a line in front of KFC. They speak in librarian tones. You check your watch. 10:55. Five minutes to blast off.

A older woman pulls up on her red bicycle, skirts flying, grey hair clinging damply to her forehead. Her cheeks are pink from navigating her clunky bike through aggressive Rhode Island traffic.

She leaps from the bike, blue eyes sparkling, and calls out “Hey, hey, hey, Is this the PETA rally?” Everyone nods, some are now smiling. She unclips the handmade signs she has bungee corded to her “vehicle”. “My grand kids helped me with these” she says holding up the bright posters for all to see.

She nods at the line of protesters and calls out “My name is Rie” The ice begins to melt and people start exchanging names. “Oh okay” you think, this just might be fun. By the end of the rally there is a line of people waiting to hug her and beg for her email.

What no one realized was that my mom suffered acutely from social anxiety and that going to these protests was like walking into a lion’s den. But she did it, countless times. For the animals.

So…um…switching out the wings of chicken for crunchy sticky-sweet and smokey cauliflower bites doesn’t seem like such a big sacrifice, Now does it?

Crisp vegan cauliflower wings have never been easire or tastier. Seve it as an appetizer or over rice for dinner.